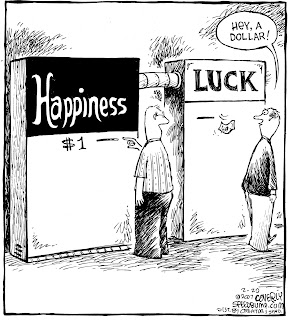 Last Saturday evening I attended an alumni awards event at Eastern Michigan University. It was there I had an interesting conversation with one of the award recipients, Dave Coverly, the famous cartoonist of “Speed Bump.” As we chatted, he explained that his success was not an accident. He mentioned that from time to time, when he is speaking with students who would like to launch their career as a cartoonist, that many of them expect success to come calling with no effort on their part to contact the outside world. As he explained, yes, he was very talented and he worked very hard, but, he did not wait for success to come knocking on his door. At the very beginning of his career, he knew that if he was going to make it as a cartoonist, he would have to do certain things to create that success. He would have to initiate contact with the outside world and get his cartoons and name in front of the people who would eventually hire him.

His point was very appropriate, since, earlier in the evening I had conversations with a couple of alumni who were between careers. One person was being phased out of his job at a manufacturer, and was quite bitter about it. The other had been working for the state legislature, and pondered the idea of going back to school to get her doctorate degree. In their own unique way, they were both looking for a new career and were not making much progress at it. Quite simply, they were stuck. So the question I asked each of them and all people who share with me their career transition consternation is, “If you could do anything you wanted to earn a living, what would you do?”

What each of these individuals need to hear is similar to Dave Coverly’s strategy that worked so well for him. Fortunately the woman who was pondering whether or not to go back to school for her doctorate degree was part of the conversation with Mr. Coverly. Now, the experts say that the eyes are the windows to the soul, and so it was for her. After the conversation was finished with the Speed Bump author, she had the look of “aha” in her eyes. She got it. I could see the wheels of awareness spinning in her head. She needed to get clear on what she wanted to do for a career, and initiate contact with the outside world to start making things happen.

How about you in your life? Where do you need to get focused so you can create the kind of career success that allows you to have fun and get paid to do it? Once you start down that road, career ecstasy will be just around the bend.

Tom Borg is a consultant in leadership management, team building and customer service. Please see more of his blogs at communicationsjobsblog.net andbusinessworkforceblog.com. To view additional job postings go to Nexxt.