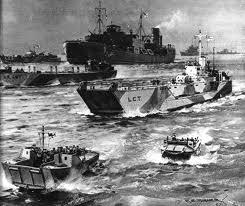 In World War Two, half of the materials manufactured by the United States up until June 6th, 1944 were manufactured for the D-Day invasion and the subsequent breakout in Western Europe. D-Day was a term for the day of any Allied invasion, but because of the fame and importance of the operation to history, D-Day has come to mean only the invasion to liberate France in 1944.

The D-Day operation took longer than one day, of course, as men and materials had to be brought across the English channel and landed on the Normandy Beaches; bringing onshore the might needed to expand the beachhead and to breakout into open country where Allied material superiority could be exploited. Still, it was a long, dangerous struggle to that breakout.

To begin with, supplies had to be shipped from the U.S. across 3,000 miles of hostile ocean which grudges mens' use of her waves even in peace time. In war, Great Britain, the staging area for the invasion and the destination for the supplies, was in a desperate battle with the German submarines hunting the vessels bringing the vital military cargo,

For a time, the Germans were sinking more merchant ships than were being built. That's when the Americans hit upon a brilliant idea, prefabricated ships. Instead of being put together by bolts and rivets , a ship's hull would be welded together out of prefabricated parts. This drastically cut the construction time. It also meant work forces could be assembled and trained in less time, leaving more experienced workers to build warships. Still German submarines, or U boats as they were called, had to be dealt a death blow.

This was done by the invention of long range aircraft and better radar. Of course, the convey shipping system, using warships for protection and British code breaking were important; but air power was a trump the U-boats had little defense against because of the stealth involved. Ironically, stealth was the U boats primary weapon.

The U boats needed stealth because contrary to popular belief, a World War Two submarine was not primarily an underseas vessel. They hunted and traveled mostly on the surface of the water where they were very fast, using night as cover. Underwater they were slow and the crews in danger of carbon-dioxide suffocation.

The better radars meant that the U boats could no longer use night as a camouflage. Eventually, U boat destruction was so great, the Nazi's withdrew them as merchant hunters.

Soon, Britain had every available field and lot crammed with the instruments of war. Because of the dirigibles which floated above England in key areas to act as buffers against air attacks, it was quipped that these huge barrage balloons were the only thing keeping the Island from sinking into the ocean from the weight of military supplies.

The idea for the craft came from the shallow bottom boats used to navigate the Louisiana Bayous. A front ramp and armor were added to make it a landing craft. Now men could move quickly onto the beaches and supplies rapidly unloaded by huge variations of the landing craft; for their transportation to the troops fighting on the front lines.

The unknown commanders of the logistics and of the supply chain win wars. And a great battlefield leader moves not just men, vehicles, ships, planes and supplies in battle, but before battle.

Jeffrey Ruzicka is a retired executive of a small company that specializes in industrial water treatment for generating stations and water treatment plants. He lives with his wife in Western Pennsylvania and is a contributing writer to LogisticsJobSite.com. LogisticJobSiteBlog.com and Nexxt.