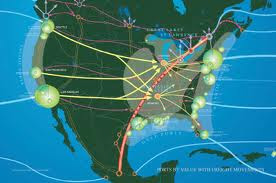 For this blog, I 'm indebted to material used from Michael Coffman,who has a PHD in Forest Science.

Logistics miracle or nightmare, the rumored NAFTA Corridor or superhighway is dead for now, killed by American Federalism. The highway which was wanted by free traders and was even denied in the beginning by many was to be 1200 feet wide in some places. The corridor was to run from Mexico, through the United States to Canada with no on/off ramps until it arrived at a central hub in Kansas City Missouri where cargo would be be inspected. Trucks could then leave the Kansas City hub for destinations in the United States or proceed on to Canada via the highway.

The objection to the corridor by many Americans besides national security was that it would allow for the by-passing of American coastal ports causing the layoffs of longshoremen across the nation. It also allows shippers to ignore the Jones Act of 1920 which heavily promotes American built, owned, and staffed ships. This was accomplished by restricting shipping and passenger trade within the United States to American owned or American flagged ships, and required that 75% of a ship's crew must consist of American citizens. In addition, the use of foreign parts and labor in ship construction and repair was also heavily restricted. This section of the Jones Act was intended to create a strong, well maintained Merchant Marine which could serve the United States during both war and peace.

By having the ships unload in Mexico, shipping could by-pass American waters and thus make the Jones Act irrelevant. The effects this would have on employment in American ports would have been catastrophic. All the plans for the corridor were brought crashing down by 4 mayors and a school board; however.

Under NEPA, the National Environmental Policy Act of 1969, before a major project can be undertaken, coordination with local communities is required to see what affects an action will have on the community. This is where American Federalism, the concept of local, state and federal jurisdictions each having a sphere of influence comes into play.

If the law had not used the word coordination, it would have meant that the State government, in this case Texas, which had allocated 80 billion dollars for the corridor's construction could have taken any advice, suggestions or complaints from local communities and thrown them away. With coordination; however, the local governments involved must not only be listened to, but they must be made partners with these local entities having the final word if they have valid arguments.

Since the corridor would have cut wide swaths across the areas it crossed and had no on/off ramps, the communities involved solution was that the highway not be built as it would have destroyed them as economic and political entities by effectively cutting them in half. Though this is not the solution the free traders wanted, they had no choice in the end. The Department of Transportation declared the project dead.

To effect this kind of change; however, proper procedure has to be followed under NEPA. Any proposal ultimately drafted has to be drafted by elected officials and be given public hearings before the proposal is submitted. It also must be a proposal with valid grounds. When done properly, it has been used to stop unwanted State or Federal projects by local communities. Challenged 60 times in court, local communities have a 100 % success rate to date.

No system of government was ever so well constituted as ours, and as long as it endures, property rights will also.

Jeffrey Ruzicka is a retired executive of a small company that specializes in industrial water treatment. He is happily married and lives with his wife in Western Pennsylvania. He is a contributing writer to LogisticsJobSite, LogisticsJobSiteBlog and Nexxt.