Mine is Mine, Yours is REALLY mine 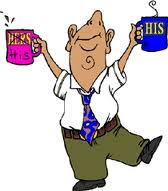 Logistics involves trade, and trade involves “free trade.” Now free trade is supposed to be the flow of goods and services across national borders with minimal interference by governments from taxes or regulations benefiting all nations involved. The reality's something different.

To start, the organization that controls world trade is the World Trade Organization, which was founded on a treaty 100,000 pages long. Now it's a justifiable question to ask how free this trade can be with such a document if the Constitution of the Untied states is written on four pages and the Declaration of Independence on one. This is especially true when you realize that the 100,000 page document is loaded with every sort of subsidy for interest groups and allows every loop hole imaginable.

For instance, signatories of the treaty have to have low tariff rates to allow for the free flow of goods. Yet this doesn't include value added import taxes which are taxes applied to goods after they enter a country. The United States has none but China has many which makes U.S. imports into China very expensive. The other thing the treaty doesn't address is how other countries, such as China and Japan will also carry out needless inspections of American goods, such as cars, and find imaginary faults that need to be fixed which raises the costs of American products.

Perhaps the most grievous part of the whole free trade scenario is the fact that American companies must obey environmental laws, labor laws, and worker safety standards here while companies making products in countries in which these things are ignored are given a free pass. How the American companies are expected to compete in this environment is something which raises questions on the sanity of the negotiators for the United States. Or perhaps the negotiators are sane since half of all American trade negotiators when they retire take jobs working for the countries with which they negotiated against.

Another thing that gives pause is the fact that China absolutely ignores copyright laws. Music and DVD rights, other intellectual property rights and patents might as well be nonexistent when dealing with the Chinese. One wonders who's at the switch of our government.

All this has led to The United States' and China's economies being effectively married. Unfortunately, the analogy breaks down here because though the economies are merging, the costs of the economic relationship aren't born equally, with one result being massive American trade deficits which leads to our massive budget deficit. Why?

Because if 800 billion dollars leaves the United States annually because of our trade imbalance, countries who end up with this money are not going to come into mom and pop stores and spend that money. Money either has to be borrowed back from overseas by the government or created by the Federal Reserve and borrowed by the government and spent to put money back into the economy, or a depression would result. And the process is continual.

This means the extra money created, when spent, finds its way overseas and causes inflation, weakening the dollar which has led to calls to dump the dollar as the world's reserve currency from some nations. So we must get our fiscal house and trade deficits in order or eventually the dollar will be dumped. With 2/3's of all American money being overseas because of its current need as the reserve currency ( Saudi oil can only be purchased with U. S. dollars), if this happens and all those dollars come home as they will, you'd better trade in your wallets for wheel barrows.

Jeffrey Ruzicka is a retired executive of a small company that specializes in industrial water treatment. He is happily married and lives with his wife in Western Pennsylvania. He is a contributing writer to LogisitcsJobSite, LogisticsJobSiteBlog and Nexxt.