Set sail for jobs in the maritime trade 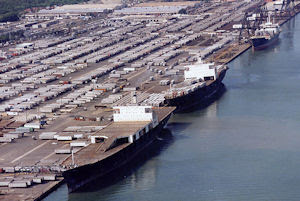 When we speak of jobs in logistics, most of the time, we talk about moving goods over land or through the air. But there is an equally, if not more, important leg of the logistics triangle - water transportation, or the maritime trade. After rail, water is the most energy-efficient method of transporting goods. Ocean going cargo ships carry hundreds of millions of tons of containerized and other cargo annually, much of it too large to travel between continents by any other method. Ships also carry goods by water within the borders of the United States as well, most notably via the Great Lakes, but also via barges that transport bulk goods on the nation's rivers, lakes and canals. According to the Bureau of Labor Statistics' Occupational Outlook Handbook, there were more than 81,100 jobs in the U.S. merchant marine in 2008. The number of persons employed in those jobs is higher because many seamen and officers work only part of the year. Jobs on oceangoing vessels are not for those who wish to maintain either ties with home or steadily employed. Ship assignments usually involve one or more voyages at sea totaling several months, after which new assignments are not guaranteed. Such a work pattern, however, may appeal to someone with wanderlust who also wants a little downtime between travels. Work in the maritime industry requires a specialized course of training involving either thousands of hours of experience as a deckhand or a course of study at one of the seven merchant marine academies in the United States. Certification and licensing are also required for most positions involving shipboard work. Jobs fall into two main categories, wheelhouse (pilots, captains, and deck officers) and engine room (engineers). The good news for those considering work in this industry is that demand for new workers is higher than average, thanks to general growth of trade, the need to replace retiring workers, and high job turnover. If you do not mind long stretches of time away from home, and if you enjoy traveling the world, a maritime career on an oceangoing vessel might be just the ticket for you; if youd rather not spend months at a time away from home and are perfectly content to stay domestic, however, there's room for you in the maritime trade as well. By Sandy Smith Sandy Smith is a veteran freelance writer, editor and public relations professional who lives in Philadelphia. Besides blogging for LogisticsJobSite.com, he has written for numerous publications and websites, would be happy to do your resume, and is himself actively seeking career opportunities on Nexxt. Check out his LinkedIn profile and read his other posts on LogisticsJobSiteBlog.com.