Trouble by the Suez 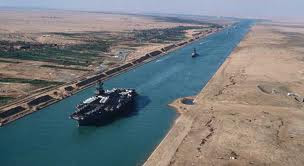 The Suez Canal, a logistical triumph, is a virtually lock-free 120 mile waterway in Egypt that may be used by any nation in peace or war without restriction. 8% of world trade flows through it. And now with the fall of Egyptian President Hosni Mubarak, there are troubling signs for the Canal's use by the West during critical times.

Not reported by American media, but reported in “Israel Today Magazine," were the million man demonstrations for Mubarak, a staunch American Ally, to remain in office to build political institutions until Egypt's September elections. Also not reported were troubling aspects of the protests causing Mubarak's resignation. How Mubarak immediately met most demands by student protesters bringing calm, only to have new, suspicious protests begin. In these protests, the leaders spoke Arabic in non-Egyptian ascents, had the same model cell phones and all protesters had the same kind of blankets, showing organization. Also, most students stopped participating in any new protests ( with their ranks replaced by professional agitators) understanding the protests had all the signs of being orchestrated by an illegal minority political faction, the Muslim Brotherhood; Anti-West and parent of Al-Qaeda.

To understand the West's danger needs an understanding of past revolutions. In the Czar's fall in 1917, Russia communists were only 6 % of the revolutionaries. The democratic majority, Social Democrats, ousted the Czar. Within months, the Communists, however, outmaneuveredand murdered the Social Democrats. In Iran's establishment of an Anti-Western government, the Shah was overthrown by democratic elements. Later, they were outmaneuvered and murdered by a small minority which established Iran's present tyranny.

Why? Without strong political institutions, the viscous win regardless of number. This is because they take advantage of newly created free institutions to launch counter-revolutions, all done under the propaganda of claimed revolutionary betrayal perpetrated by the original revolutionaries who are then overthrown. Tyranny follows to subdue the people because propaganda produces no bread and so the revolutionaries can steal hoards of wealth, like the new Czars they've become.

This is difficult to do with long established free institutions because the people will rally to these established institutions. And radicals who wish to harm these institutions when placed in them, find the institutions hard to overthrow because of citizen loyalty to them and respected checks and balances. In America's Revolution which produced liberty, English institutions were replaced by similar American ones, helping the revolution. The colonists, after all, originally fought for their rights as Englishmen.

As for America involving Herself in the internal affairs of other nations; our naivety often exploited by Anti-Western elements, please note:

- She goes not abroad, in search of monsters to destroy.

She is the well-wisher to the freedom and independence of all.

She is the champion and vindicator only of her own-.

Jeffrey Ruzicka is a retired executive of a small company that specializes in industrial water treatment. He lives happily in Western Pennsylvania with his wife. He is a contributing writer to LogisitcsJobSite, LogisitcsJobSiteBlog and Nexxt.