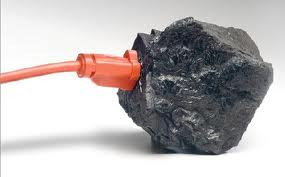 The United States, called the Saudi Arabia of coal, is about to import more coal than She exports despite the fact that She has 27% of the world's coal reserves. The import/export ratio is changing because of several factors.

Transportation costs for mandated low sulfur coal from Wyoming and Appalachia are increasing with rising fuel prices. This import/export ratio is further aggravated by a falling dollar which makes U.S. exports cheaper for other countries. Couple this with American coal use being down because of economic hard times, and China and India's coal imports up as their economies weather the financial storm, and you have the ingredients for an imbalance. China and India can also use our high sulfur coal because of a lack of environmental laws.

Ironically it's cheaper to import low sulfur coal from overseas for American companies on the East and West coast according to the “Christian Science Monitor,” than use ours. Since other countries don't have to follow labor, worker safety or environmental laws when mining, the logistics costs to ship the coal from overseas by ship and then by train is less expensive than buying U.S. coal.

To compound the trade imbalance, the EPA's really cracking down on American manufacturers and power companies to use low sulfur coal. Now, high sulfur coal can be cleaned first to comply with low sulfur regulations, but it's cheaper to buy naturally occurring low sulfur coal.

The United States actually has the largest reserve of low sulfur coal in the world. However, by executive order former President Bill Clinton made it impossible to mine for this coal in it's largest coal reserve by creating the Grand Stair Case Escalante National Monument. The problem for coal mining there isn't that mining was declared illegal there, but that the roads and power lines necessary for coal mining can't be built and erected under the act.

So to get the low sulfur coal we need, we must import it from Venezuela and Indonesia. Less comes from Venezuela because of infrastructure problems. In Indonesia; however, a consortium called the Lippo group has no such problems. It was also the largest contributor to former President Clinton's Presidential campaign, and benefited the most from the monument's establishment as they export low sulfur coal.

The biggest exacerbation for the use of coal regardless of sulfur content in the United States is the propaganda prevalent from environmental groups. With new technology it's now possible to mine for coal with minimum environmental damage, which is ignored by this propaganda. Also, like in Alaska when it comes to displaying the effects of drilling for oil, environmental groups will show beautiful and serene sceneries that are supposedly to be ruined rather than the actual areas where development is to take place; often harsh, barren and unpicturesque wastelands.

This has led to a boon for foreign purchase for American high sulfur coal as States and companies make aggressive efforts to lock down overseas importers. This unfortunately cuts off the coal for use by Americans in case of an energy crisis. Once again as in not drilling off much of our coasts ( which foreign companies can still drill in the exact same area without subjection to American law), the United States pursues a short-sighted green energy policy, without regard to common sense.

To close, no knowledgeable person is saying that sulfur or pollutants should be spewed into the air. But there are ways to accomplish a greener planet and energy independence without the draconian measures being employed. If you are green or polk- a-dotted, you will still freeze in winter without heat.

Jeffery Ruzicka is a retired executive of a small company that specializes in industrial water treatment. He lives happily with his wife in Western Pennsylvania. He is a contributing writer for LogisticsJobSite, LogisticsJobSiteBlog and Nexxt