Weighing in on bigger, heavier trucks 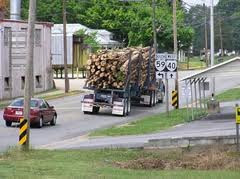 The American trucking industry has renewed its push for heavier, longer trucks on America's highways.

A bill re-introduced in Congress in mid-February would allow states to permit trucks weighing as much as 97,000 pounds to use Interstate highways within their borders. Currently, Federal law restricts trucks to a maximum weight of 80,000 pounds.

Advocates of the higher weight limit say that it would allow shippers to make better use of existing trailer capacity. They note that shippers now send trucks out with plenty of unused cargo space because their rigs have hit the weight limit; raising it, they say, would mean fewer trucks on the road and reduced fuel costs. They also point to a pilot program in two New England states that permit truck weights up to 100,000 pounds; two Senators from those states, Susan Collins (R-Maine) and Patrick Leahy (D-Vermont), say the program has been successful and should be made permanent.

They also argue that since most of America's major trading partners already allow heavier trucks on their highways, the U.S. is put at a competitive disadvantage thanks to higher shipping costs due to lower efficiency.

Not everyone buys the trucking industry's argument, however. Opponents of the move point out that heavier trucks cause significantly more damage to the roads they use. They also note that one-quarter of the nation's bridges are already rated either "structurally deficient" or "functionally obsolete," and that it would cost $188 million (in 2006 dollars) to bring these back up to snuff. Allowing heavier trucks on the highways, they argue, would only add to both the number of substandard bridges and the cost of repairing or replacing them. They also point to statistics that show that heavier trucks also make the roads less safe for others who use them.

Looking to get your career moving down the highway? Visit LogisticsJobSite.com.

Sandy Smith has been blogging for LogisticsJobSite.com since 2010. In addition to launching award-winning newspapers and newsletters at the University of Pennsylvania and Widener University, Sandy is a veteran writer whose articles and essays have appeared in several local and regional media outlets, including The Philadelphia Inquirer, the Philadelphia CityPaper, and PGN, and on several Web sites. He is also an active participant on several discussion boards, including PhiladelphiaSpeaks.com, where he posts as “MarketStEl.” He has been supporting himself through a combination of freelance and part-time work and unemployment compensation since early 2009 and is himself an active job-seeker. Read more of his posts on LogisticsJobSiteBlog.com and follow him to Nexxt for more job opportunities.